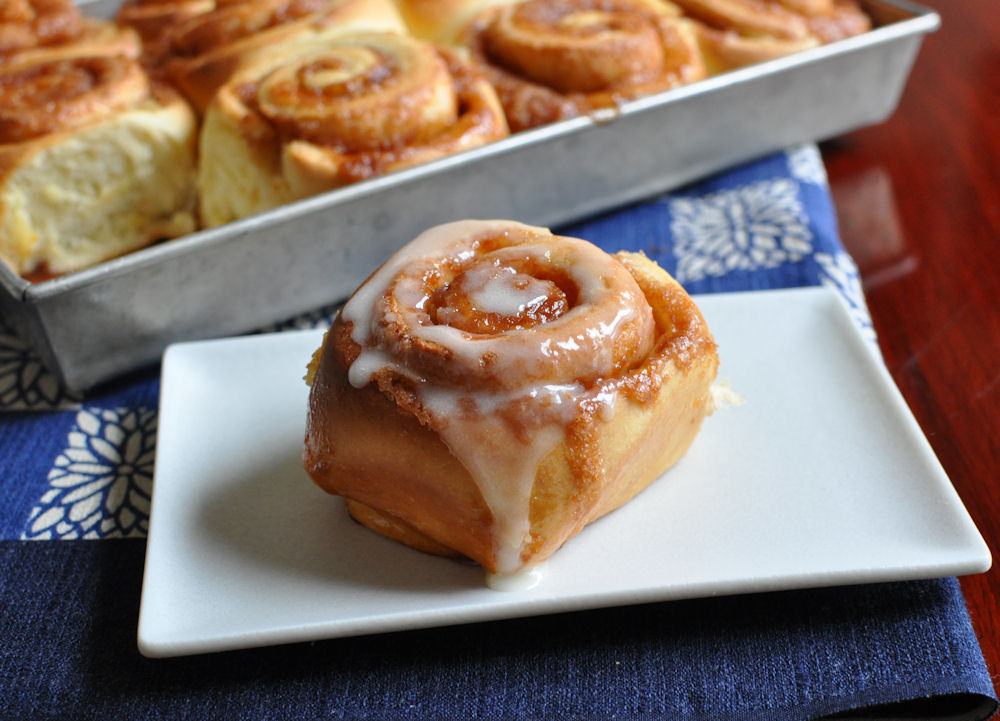 I had a sudden craving for cinnamon buns. The weekend was coming up and what better way to spend a Saturday morning than making and eating freshly baked cinnamon rolls? So I rolled up my sleeves and went to work. I had bought some Minneola tangelos and thought it might be interesting to see if the two would make a nice pair. I grated the zest of one tangelo and added it to the dough, which I let rise overnight in the fridge. The next morning I rolled, sprinkled, cut and baked the cinnamon-orange swirls of dough. The flavor of the tangelo was not very distinct, just a hint, even after using the juice for the icing. Next time, I may add zest to the cinnamon filling and maybe to the icing as well for a more pronounced flavor. I'll try that if I get another sudden urge to bake cinnamon buns. But I'll probably get sidetracked by another interesting fruit. Here's to experimentation!

zest from one Minneola tangelo

Dissolve yeast in warm water in warmed mixer bowl. Add lukewarm milk mixture, eggs, and 5 cups of flour to the yeast in mixer bowl. Attach dough hook and mix on low for about 2 minutes. Continue mixing and add remaining flour 1/2 cup at a time until the dough clears the sides of the mixer bowl. Knead 2 minutes longer. Place dough in greased bowl, cover and let rise for about 1 hour or until double in bulk. Or cover and let rise slowly in the refrigerator overnight. Punch dough down and roll out the dough into a 10 x 24 inch rectangle.

For the cinnamon filling:

Mix together all of the above ingredients well.

Spread the cinnamon filling evenly over all of the rectangle of dough. Roll tightly from the long side to form a 24 inch log, pinching the seam together. Cut the log into 24 slices, about 1 inch thick.

Fresh tangelo juice, from about one half a tangelo

Add juice in small amounts and mix into the powdered sugar, until the icing is the consistency of honey.